I had trouble communicating from the DMZ to the inside when I built a DMZ with ASA 5505 in my home laboratory.

Because ASA 5505 can not use VLAN trunk without a security license, it connects to Catalyst and aggregates it on access respectively.

Cannot communicate from DMZ to inside

I applied an appropriate ACL to the interface and checked the communication, but I can not communicate from DMZ to inside.

The settings of interface, security level etc are as follows. The VLAN name inside is management.

Setting of NAT and ACL is here. The number of servers is small, ACL is spread widely because it is under exam at any time. The rules of NAT have room for review.

Capturing with ASA internal packet tracer is as follows. The packet is being dropped by no-forward-rule.

Although such an ACL is not set, it is rejected by no forward of the interface setting as the output of packet tracer does.

VLAN configuration of the Cisco ASA 5505

It seems to be old information, but main function does not changed in recent version.

In the setting guide, the following VLAN configuration is described. 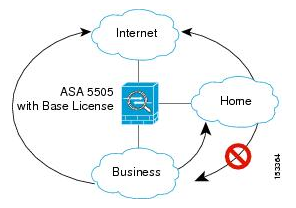 no forward interface Vlan business is set in home VLAN in the figure.

I think that it is reasonable to review this and make it no forward from the outside of the Internet connection to management (inside). 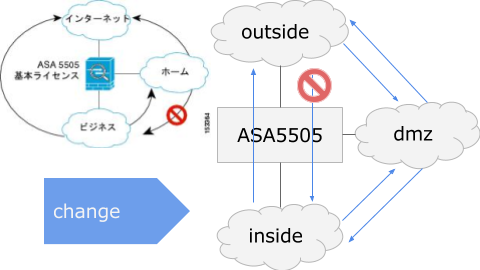 Outside interface to no forward

Traffic from DMZ to inside is necessary for various communication such as R-Proxy. Therefore, cancel the no forward of the DMZ and set no outside to outside instead.

Attempting to simply add the setting of no forward will result in an error.

For testing, After doing the no forward setting for the VLAN not used, it was able to set it correctly. Actual communication is no problem, It can route all between each interface. However, communication from dmz to inside requires ACL. When ACL is applied, permit is also required for internet.

I was going to throw away the communication from outside to inside (Vlan 1), but I have never been able to continue communication considering the ease of migration.

The final interface settings are as follows.

In the ASA 5505 used in the home laboratory, an event occurred in which communication from the DMZ to the inside was not possible. The problem was the influence of no forward interface, which is required for the ASA 5505 basic license. Finally, by setting no forward interface to outside and making the designated VLAN unused, it became possible to communicate between all interfaces (controlled by ACL policy).