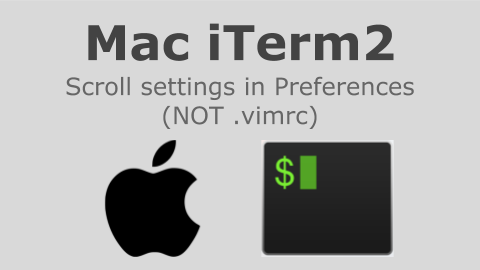 Change the scroll setting when switching to Vim screen with iTerm 2 popular as a MacBook terminal.

I often see an article saying .vimrc the following setting, but it did not work well in my environment.

This time, not the .vimrc, but how to switch the operation from iTerm's setting (Preferences) is described.

Yes : Scroll in the Vim window
No : iTerm window scrolls regardless of Vim

In my case, since there are many cases I want to paste from Vim in past console logs, I set the setting to No so that the iTerm window scrolls.

While using iTerm 2 with MacBook, you can change the scroll setting in Vim window from Scroll wheel sends arrow keys in alternate screen mode. in Preferences.