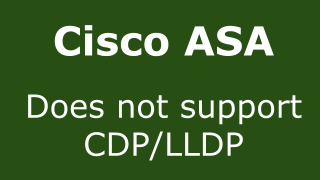 Since the Cisco ASA is a security device, It does not support CDP/LLDP which collects information on neighboring NW devices.

Information on the Cisco Support Community

Several questions on ASA's CDP/LLDP compliance status are being made. The question is about ASA 5505, but it is the same specification in ASA series in general.

As described in this article, when connecting a wireless AP to the PoE port of the ASA5505, if you establish a CDP neighbor with another Cisco device (such as a Catalyst switch) beyond the ASA, PoE can not supply power correctly there are cases.